In November of 2015, Cashman Dredging was awarded the contract to deepen the Intracoastal Waterway (ICW) in Fort Lauderdale, Florida. The client was the Florida Inland Navigational District (FIND), with Taylor Engineering working as its Construction Manager. The work spanned roughly 2.5 miles on the Intracoastal, starting at the 17th Street Bridge to just north of the Las Olas Bridge. The objective of the project was to deepen the ICW to a navigable depth of 15 feet, with an allowable over-depth of +2-feet, totaling 185,000 yd3. The project was permitted for upland disposal only, which was achieved via offloading at the Dredge Material Management Area (DMMA) located inside Port Everglades. In early March of 2016, we broke ground, and it went something like this…

Temporary Haul Road
Part of the design for the project required Cashman to build a road from our dredge material offload site located in Port Everglades through the thick neighboring jungle of mangroves. The road intended to eliminate any disruption to Port traffic, thus diverting our dredge material-hauling trucks—all 12,931 of them—in and out through this one-way road. The road construction consisted of installing a lift of stabilizing stone, with a section midway of reinforced concrete for the turn, and the final run of 4'x16' timber mats through the forested section. The purpose of the timber section was to allow for any rainwater to drain directly into the soil. The road was finished off with guardrails at the turn, and concrete barriers with attenuator barrels to protect Florida Power & Light's transmission towers that were located inside the mangroves. After much anticipation, we received our roadway permits, and construction began. We had some creatures that played the role of observers both during the roadway construction and throughout the project: African Vervet monkeys. Legend has it they were released from a testing laboratory several decades ago and found refuge in this protected mangrove region. They have thrived ever since, with no known ecological effect on the area to date.

Mobilization
Mobilization went relatively smoothly, with multiple components going on at one time (thanks to the hard work of the Superintendents orchestrating the whole process!). The road was built, piles driven, and spill pans installed at the offload site. The deck barges were loaded out in New York, along with the dredge AJ Fournier. The process was enhanced by the excellent coordination effort by Beau Payne and his towing company, P&L Towing. The existing infrastructure at the berths where we had planned to walk the equipment off, required additional engineering and specialized steel mats to direct the load as far away from the bulkhead as possible. Fortunately for us, the engineer we had selected to provide stamped drawings knew of a local contractor with a set of these ramps they had utilized for another project at the Port. The barge and ramps were positioned per the approved design drawings, and all that remained was to wait on the tide to come in; only then could the Sennebogens be walked off and set up over at the DMMA.

Dredging
The backhoe Dredge AJ Fournier, with Captain Dean Chambers and his crew, led the way. Their mission was not only to dredge and clear the bottom as quickly as possible but also to maintain the peace in the navigational channel. This narrow 2-mile stretch is near a fully functioning Port, situated between two drawbridges, winding with two 90-degree turns, combined with entire fleets of the mega yachts, fishing charters, and "drunken sailors." Keeping the peace would not be an easy feat. There stood the Dredge AJ Fournier with a scow, large and utilitarian, among a sea of gleaming mega yachts. Grease-covered steel-toed boots were side-by-side with squeaky clean white boat shoes. Luckily, we were greeted with open arms by most of the marine industry stakeholders. After all, the project is a huge benefit to the area, especially during the Boat Show Season in the fall, when mega yachts from all over the world come to Fort Lauderdale. Captain Chambers and his crew worked diligently and made it a point to continuously communicate and coordinate with the surrounding vessels and marinas daily. This information was vital for daily and future planning.

Utilities
The bulk of the project was typical of most dredging assignments: dig, move, dig, move, scow swap, dig, move, etc. The exception on this project was the two drawbridges, which acted as our 'start' and 'finish' lines. These drawbridges serve as the main arteries feeding the sunny beaches and marinas along the A1A highway with a steady flow of locals, spring breakers, and cruise ship tourists, while also allowing the boating community to traverse freely up and down the Intracoastal. Without these bridges, life as every local knows it would cease to be. The last thing anyone would want is a disabled bridge due to an inadvertent slice of a cable. The actual number of current and retired utilities running under these bridges was mind-boggling. The record drawings of these utilities were not precise, and in some instances, were non-existent. At the beginning of the project, we had employed a utility location company's services, which provided a little more insight. But, because most of these utilities were either inside or just below the allowable depth of the project, we required more information. With the combined efforts of our project engineer Kyle Reeves and one very capable dive company, in conjunction with some nighttime surgical dredging, all went off without incident.

Offloading
Behind the smooth façade of this operation were the Supervisors (Butch Sinkus, Thomas "Junior" Mitchell, and Paul Poirier) and Crew at the DMMA. This project was an upland disposal project, and the DMMA inside Port Everglades was the epicenter through which all material came and went.
Even though the material was initially thought to be highly desirable as a sub-base for roadways and parking lots, it had an extraordinarily high lime rock-bearing ratio (LBR). This meant that getting a continuous stream of commercial projects that required the volume we had at the site was a challenge. Unable to move the material out fast enough made the process of storage quite an undertaking. Ordinarily, the dewatering process would have produced a nice cake-like substance that would stack easily and dry in no time; this was not the case at the DMMA. Keeping up with the production rate of the AJ required relatively quick turnaround time for the offloading of scows, even with three scows in rotation. The result was trying to contain the slurry while simultaneously trying to dry out the mountain in which the freshly delivered slop needed to be stored. The site's size was not exactly proportional to the amount of material that ended up being stockpiled there. The dredging and offloading operations were no more than 6 miles away from one another, yet somehow being at the DMMA was like being on another planet; the days were longer, the sun was hotter, and the bugs were bigger. To the credit of the entire crew at DMMA, the project was completed. Over 205,000 cubic yards of material was dewatered, offloaded, stacked, and trucked out.

Acknowledgments
It was important to be adaptable, know our limitations, and think innovatively for creative solutions on this project. There were numerous aspects to manage: the dredge, the offload operations, the boats, the trucks, and the surrounding maritime industry. All operations had to be in sync for the project to be a success, and our team managed this well. The project was permitted for two years but was 100% completed by the end of May 2017. All dredge material, initially slated for landfill disposal, was hauled offsite to DEP approved beneficial reuse locations. Turbidity was a non-issue. More importantly, no manatees were harmed in the conduct of this project. The ultimate success of this project was due to the hard work and effort of a capable and creative management team made up of Steve Tobin, Danielle Taylor, Dean Chambers, Butch Sinkus, Paul Poirier, Junior Mitchell, Kyle Reeves, Dean Kirby, and Bryan Cooper as well as excellent craft personnel including Allan "Chip" Smith, Steve Castillo, Charles Horn, Carlos Valdez, Taylor Nimmer, Rodney Moultry, Chris Bourque, and Isidro Madrigal. 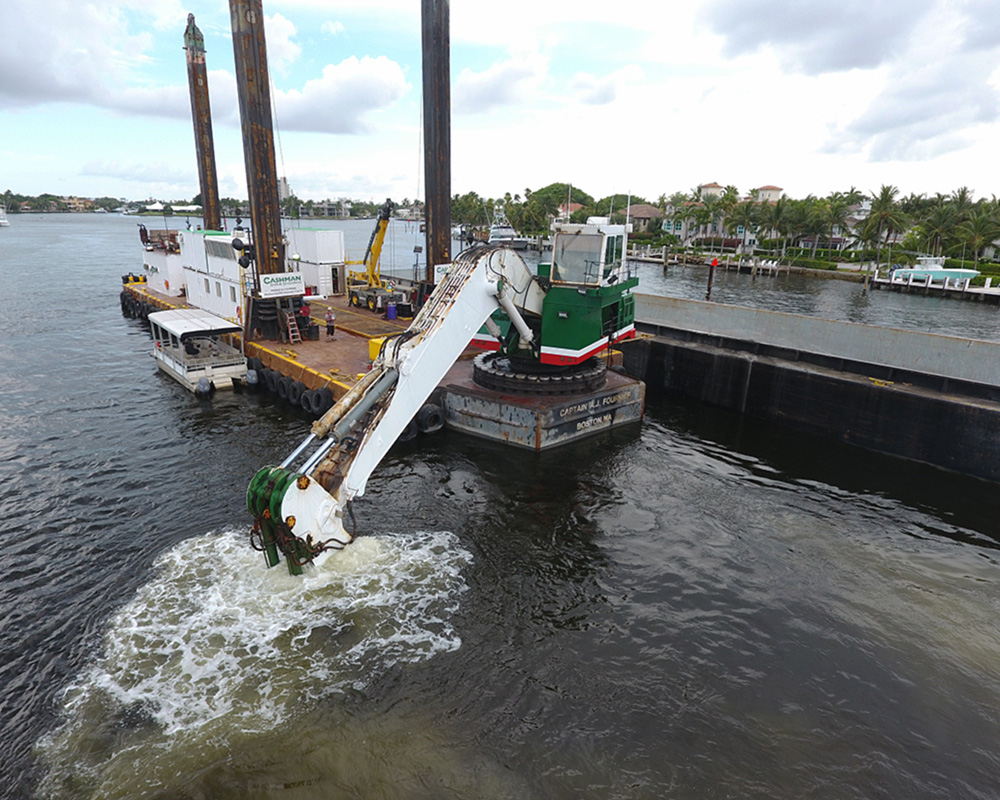 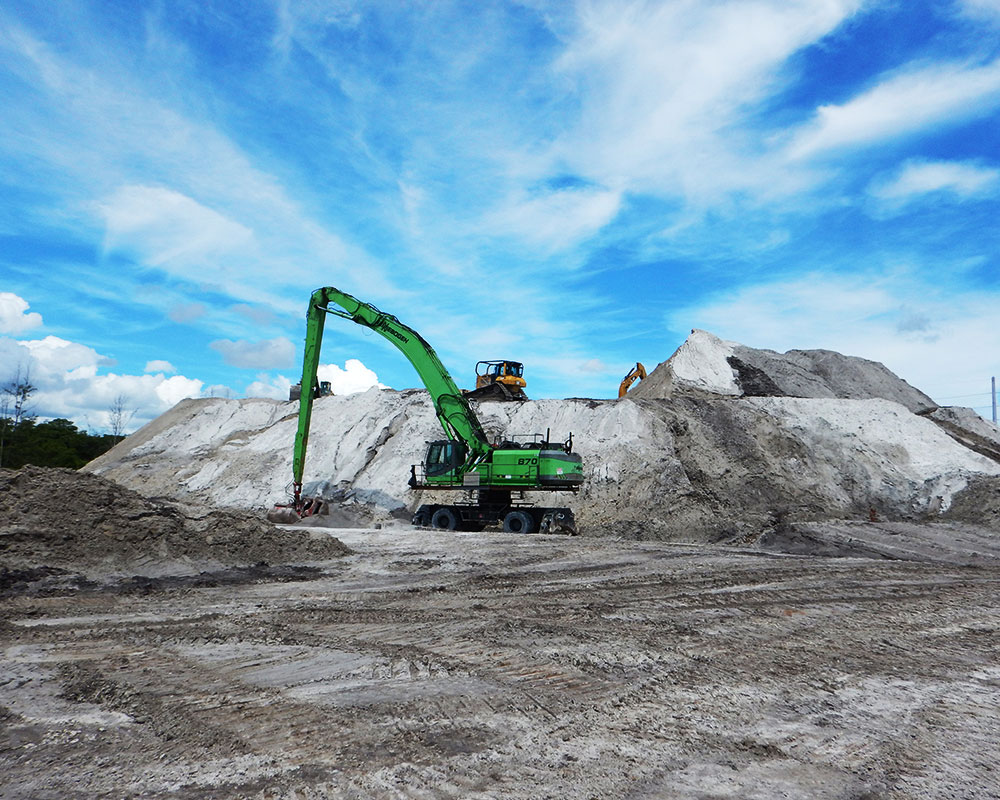 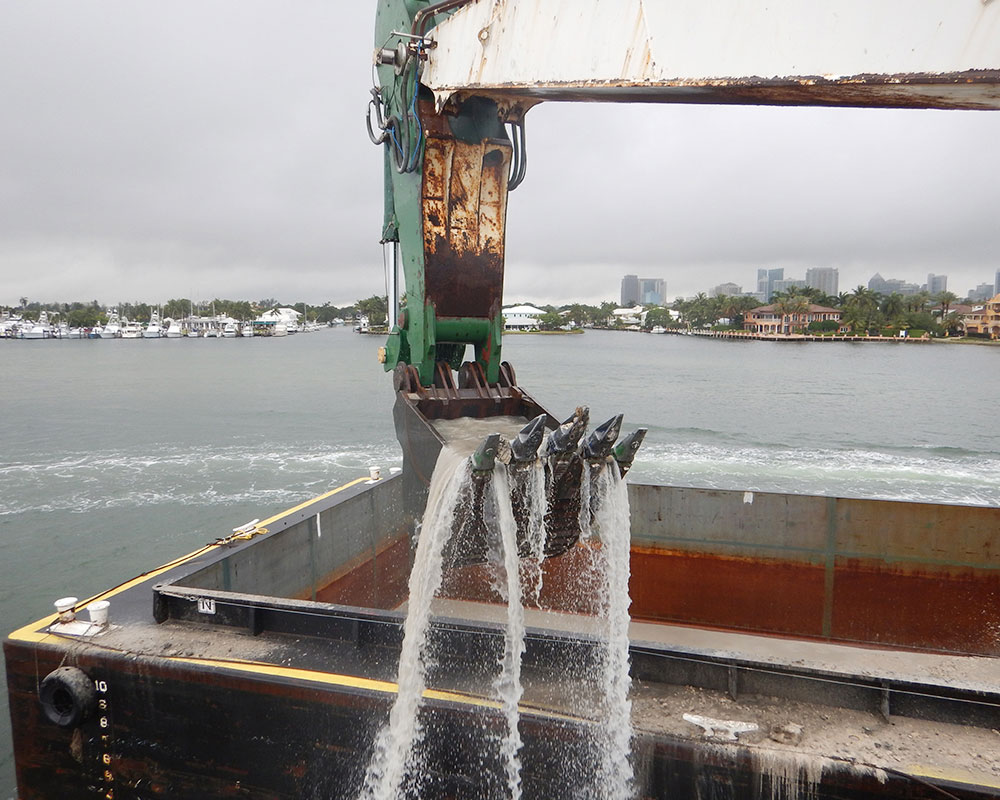 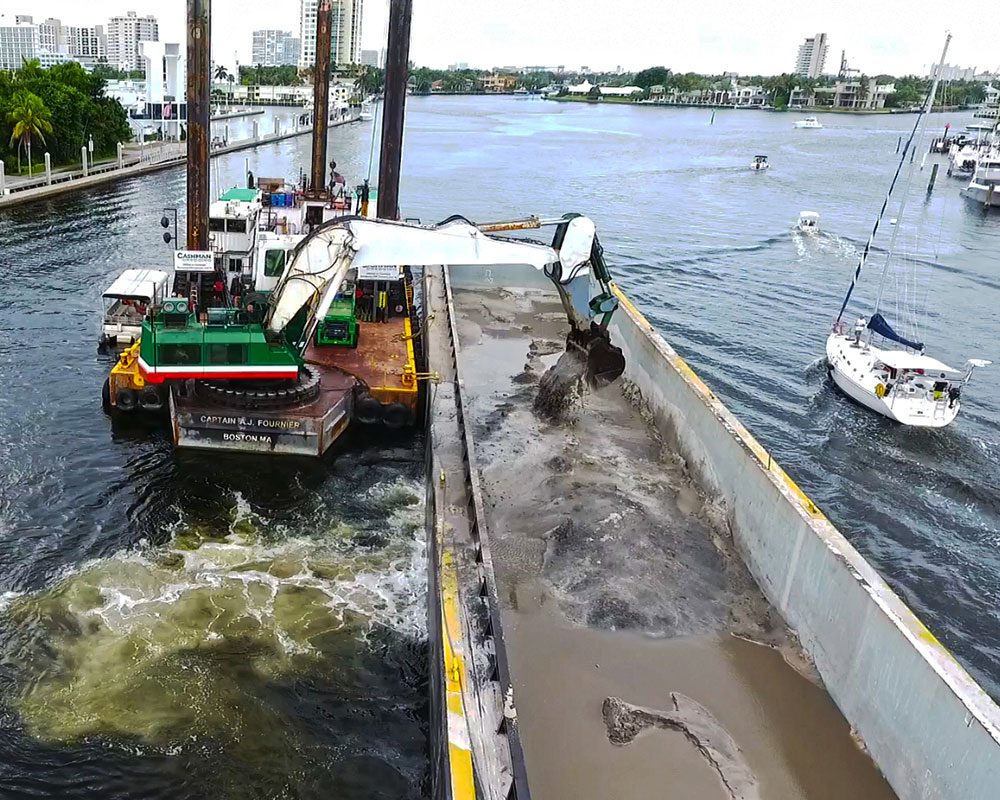 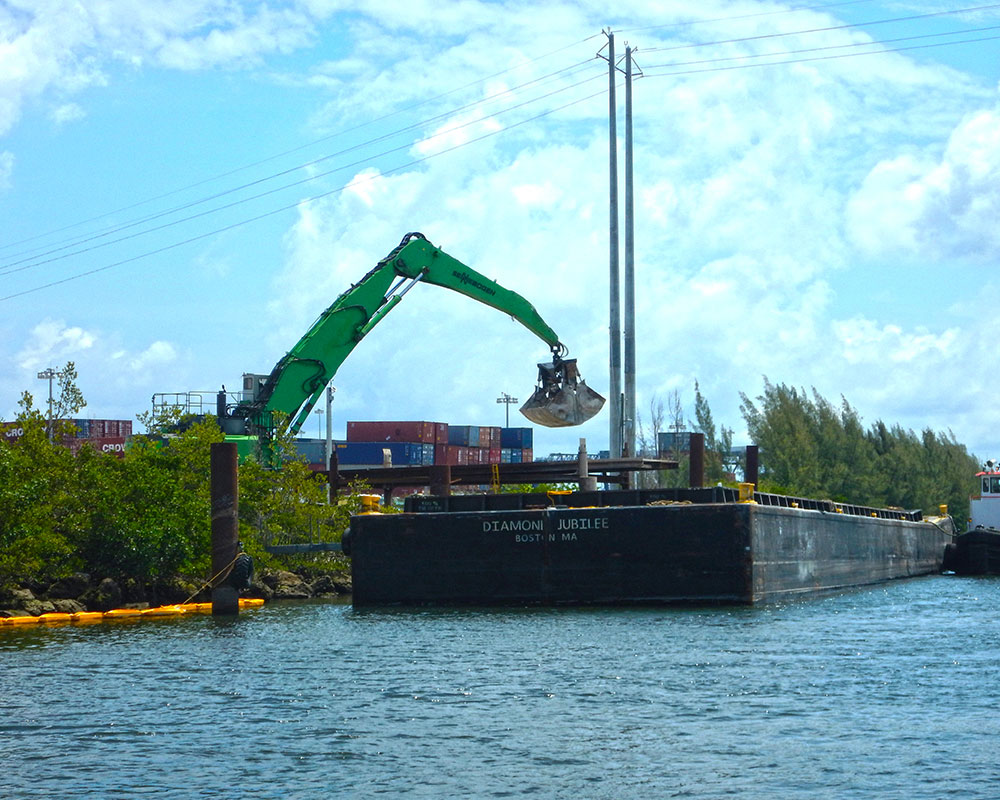 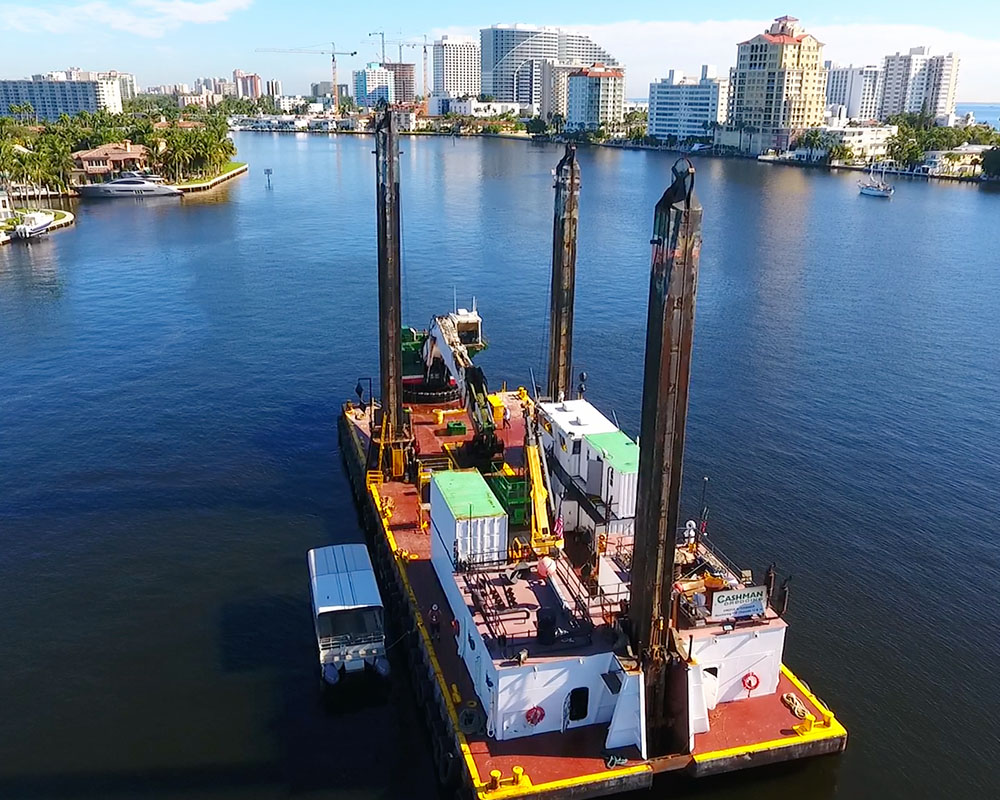